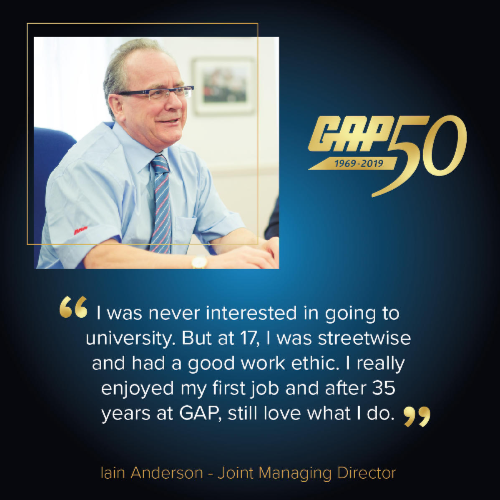 Iain Anderson is celebrating his 35th year with GAP, having joined the business in 1984 before becoming Joint Managing Director four years later.

For their 50th anniversary, they created a book dedicated to their staff. Below shows the 35 years Iain Anderson has been at GAP.

Iain’s drive and entrepreneurial spirit was obvious from a young age. While still in his teens, he made money from buying and selling old cars and motorbikes, fixing them up in between.

After going through the motions of college. In 1979 Iain grabbed the opportunity to join plant hire company Hewden Stuart with both hands. He relishes his role selling used JCB equipment and had a superb relationship with his boss and owner, Steve Bryant, whom he remains good friends with today.

For four years, Steve regularly updated Gordon, whom he had huge respect for, on his son’s progress. By 1983 Ian had learned all he would at Hewden Stuart and was ready to join the family business. He was posted initially to the Prestwick depot, managing it until 1986. This was a hugely significant year for GAP. Having acquired Henderson Plant which specialised in tool hire, GAP sold all its operated plant and closed its Ayrshire site.

Iain was then ‘shipped off’ to Newcastle, and Henderson Plant’s HQ. Here he took up the role of Head of Tool Hire, responsible for overseeing credit control, producing P & L’s and visiting customers. Initially dispatched for a year, Iain returned to Glasgow in 1996, based at GAP’s Kinning Park depot. He then moved to the Head Office, where he remained involved in the Tools division. For many years now, Iain has headed up Group Sales and Operations.

Iain says “People ask if my role is Sales or Operations. It’s actually bith. The greatest advantage of being a major shareholder is you can stick your nose in wherever you want. Though I say I’m not nosey, but inquisitive!”.

Very much a people person, Iain’s real passion is for dealing directly with customers and winning big accounts. And if something should go wrong and a customer isn’t happy, Iain is always first on the scene to salvage things and find a way to make them work again. He also takes a special interest in the new divisions, and for the past few years has been heavily involved in GAP Vehicle Hire which has grown from 135 vehicles to 4,000.