PRESS RELEASE: The Nation's Leading Lumberjacks To Chop Their Way To The Top At Brand New BBC Countryfile Live 2016

It has been announced that the 2016 STIHL TIMBERSPORTS British Championship will be held at the brand new BBC Countryfile Live, 4th – 7th August at Blenheim Palace, Oxfordshire.

Visitors to Countryfile Live will be introduced to the major league of lumberjack sports worldwide as highly-skilled lumberjack athletes chop, saw and slice at speed in the country’s fourth annual Championship event.

The Countryfile Live show will give visitors the chance to explore every aspect of the British countryside featuring over 500 exhibitors, live arena shows, animal displays, the latest farming machinery, outdoor activities for kids, hundreds of food and craft stalls to shop and the best of British food and drink. Set to be one of the country’s biggest outdoor events, BBC Countryfile Live will be hosted by the renowned BBC Countryfile presenters including Matt Baker, John Craven, Adam Henson, Anita Rani, Ellie Harrison and Tom Heap. 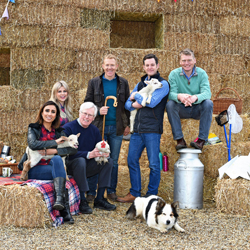 STIHL TIMBERSPORTS started 30 years ago in the USA and arrived in Britain in 2012 with the country’s first British Championship.  Lumberjack sports origins go back to 19th century Australia where foresters would compete with each other outside work, putting their forestry skills to the test.

Spike Milton, former STIHL TIMBERSPORTS British Champion and British Team member, says the athletes will be sure to put on a rip-roaring show for visitors.

“Both technical and physically demanding, STIHL TIMBERSPORTS is a marvellous sport to watch. The lumberjack athletes are remarkably quick and precise as the chop and slice their way through the competition.

“The six STIHL TIMBERSPORTS disciplines test the athlete’s ability to deliver both explosive power and accuracy while retaining total focus to ultimately win the British title and make the British team. The British team will then compete in Germany at the STIHL TIMBERSPORTS 2016 World Championship in November. With stiff competition this year – competitors will need to be well-oiled machines to make the cut,” says Spike, who is now STIHL Global Sporting Director and British and International TIMBERSPORTS Trainer.

Tim Etchells, Managing Director of SME London says, “We are thrilled to have secured STIHL TIMBERSPORTS to entertain our visitors at the first ever BBC Countryfile Live Show! The British Championship is an incredible spectacle and offers a unique experience for our visitors. There really isn’t another sport like it – visitors, prepare to be on the edge of your seats!”

The heart of Countryfile Live will be a spectacular live show in the 4,000 capacity Countryfile Live Main Arena. Throughout the day, each show will be a celebration of the very best that rural Britain has to offer, focusing on Britain’s love of farming.

BBC Counrtyfile presenter, Matt Baker says, “We're opening up Countryfile to the general public and allowing a hands-on experience for all those who watch and love the programme. We hope people will come along and have fun with all the family. It's a full-on live experience with a bit of a festival vibe.”

From Thursday 4th – Sunday 7th August 2016 visitors to BBC Countryfile Live can enjoy the 2016 STIHL TIMBERSPORTS British Championship, the British Rookie Championship and live demonstrations from the current British team. What’s more, over the four days there will be wood carving demonstrations, a rugby tackle game for the kids, STIHL and VIKING product displays and talks from STIHL experts such as Jane Moore – a former Chelsea Flower Show medal-winner.

Tickets are available now from www.countryfilelive.com priced at

Group discounts are available for groups of 10 or more on standard price tickets (excludes VIP & family tickets). To book a group, please contact: 020 7492 1637 or countryfilelive@encoretickets.co.uk.