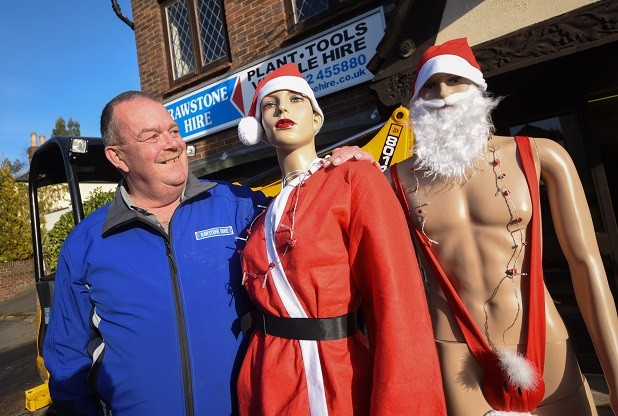 A businessman was left baffled when police sent two officers to investigate his "sexy santas" - but failed to show up for a £12,000 burglary.

Yesterday Kent Live reported how two PCSOs attended the Rawstone Hire depot in Riverhead, following reports that a member of the public had called the police over scantily-clad mannequins.

On Wednesday (November 30), Richard Phipps said he reported the theft of a £12,000 chipper machine from his London Road depot.

After calling the 101 non-emergency number to report the stolen machine, Mr Phipps said he was informed that the police were no longer investigating.

The 59-year-old said: "Two policemen turned up after the woman had complained. They were community support officers.

"When I originally reported it I gave them the details but they were not taken any further. My director rang 999 to report it and I had another call from the police again yesterday.

"They have reopened the investigation and this could have been the result of my director's call."

As a result of two calls being made, the investigation was accidentally duplicated after enquiries were initially closed due to insufficient CCTV and forensic evidence.

A spokesman for Kent Police said: "Between 30 November and 1 December, 2016 a burglary was reported at a business address in London Road, Riverhead. It was reported that an item of plant machinery had been stolen. Kent Police carried out a thorough review of the circumstances and any opportunities available for investigating the burglary. No suspects were identified and the investigation was concluded pending any further new information. On 6 December, Kent Police was made aware of a new line of enquiry through possible CCTV evidence. As such, the investigation is now being reviewed and enquiries are on-going.

"On 2 December, Kent Police was called at 2.15pm when a member of the public made a report about a business's display in London Road, Riverhead. The business was visited by local PCSOs who found no offences had been committed."