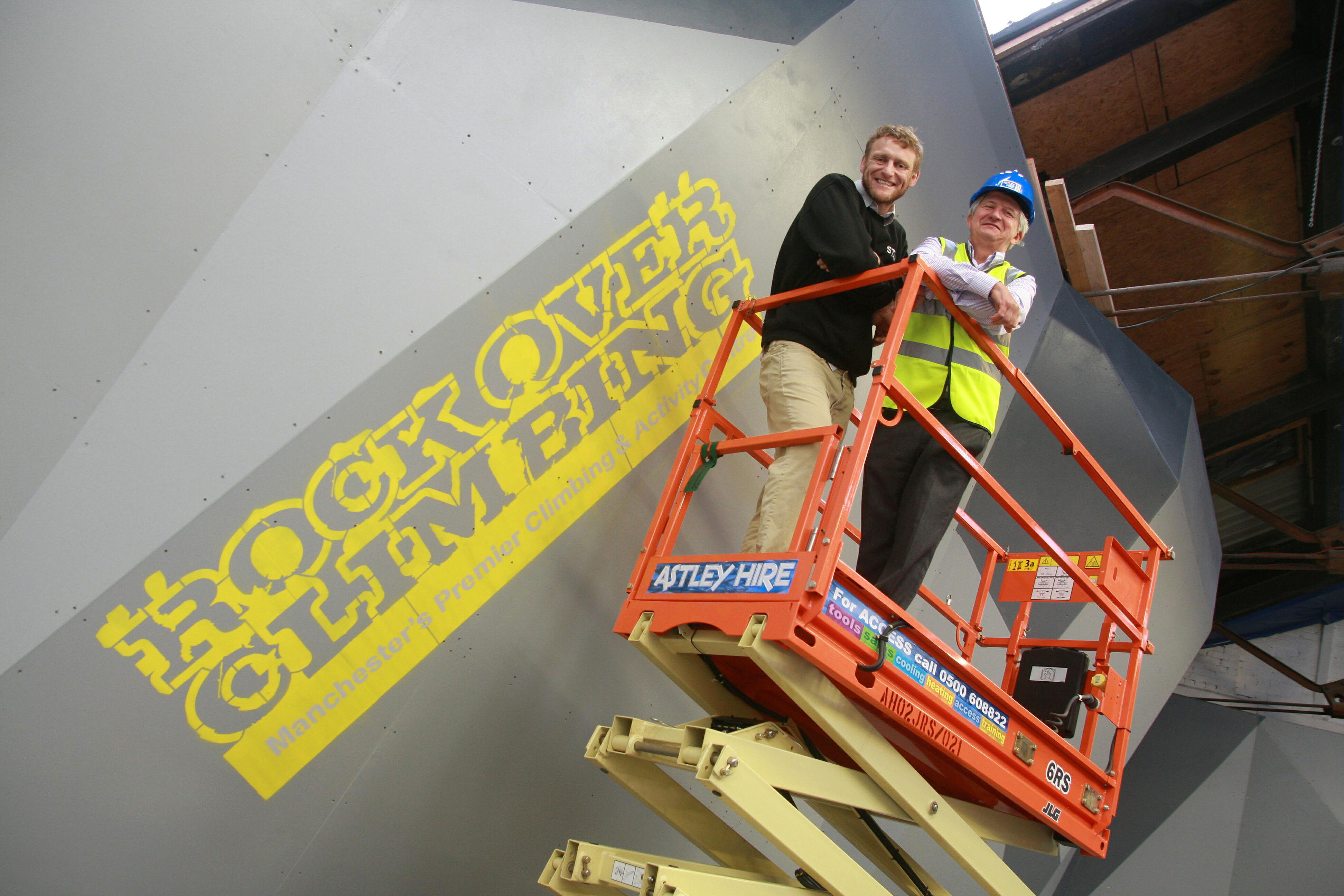 The Hub has just opened at the Rock Over Climbing centre in Manchester, which is the first of its kind in the UK, and will also be open to the public.

It’s a dream come true for former mountaineer and Rock Over Climbing owner Tom Stewart, after Olympic climbers told him they were in need of an indoor training wall.

The impressive £150,000 facility would have not have been built if it weren’t for local firm Leigh-based Astley Hire and others, donating equipment and resources free of charge, said Tom.

Astley Hire loaned a scissor lift to the project allowing the wall, which is also open to the public, to be constructed quickly.

The 6,000 square foot new Hub includes 24 climbing routes that are changed regularly to keep the elite athletes on their toes.

Tom said: “It would have been absolutely impossible for this to be built without the help of these partners and everybody gave their resources for free”

“The wall would normally have taken three months to but we managed to do it in two weeks. Astley Hire were very flexible, they gave us the scissor lift for ten weeks, so it allowed us to get a lot of roofing work done too.”

Stephen Dorricott, MD at Leigh firm Astley Hire said: “We heard about the Hub project and we were more than happy to help out with the loan of one of our scissor lifts.

“If our resources can even go a little way to helping the GB Olympic team then we would be very proud indeed.”

Other firms which helped make the project happen included Hanson Plywood and Axford Timber which supplied the materials for the climbing wall frame, and Eveque which supplied safety mats.

The facility has won backing from the British Mountaineering Council which is the UK governing body for the sport of climbing.

Tom, 40 originally from Chorleywood near London, moved to Manchester to study. He used to climb regularly all over the world including in North Wales where he also previously lived.

There is even a mountain in Kurdistan named after his daughter Sarah, after he was the first to ascend the peak, but he had to give up the sport after breaking his leg in a fall on a mountain in 2006.

“I’ve always had a passion for climbing and mountaineering and I’ve always wanted to help the GB team,” said Tom.

“Britain is constantly at the forefront of something but we lack support for the athletes so most British climbers live in the back of a car and do their training really with very limited resources.

“It’s like Chris Boardman bac in the 90 he trained in his shed then broke the world record.

“Dave Barrans the captain of the GB team saw we had a spare warehouse and asked if we could build an Olympic wall here.

“At first we thought it would be too expensive, but my wife and I spent months thinking about it and realised if we could bring Olympic level athletes to Manchester to train, then perhaps it was a viable project.”

“The concept of the wall is it’s the British team’s training facility. It’s the only one of its kind and the first time there has ever been something like this in the country.

“It will be used by the British Olympic team for training sessions, Shauna Coxsey

the current world champion, Dave Barrans, Molly Thompson Smith they will all train there, they are all trying to get to the Olympics

“Then at other times it will be open to the public.

“It’s there for athletes and aspiring athletes, and the rest of the Rock Over Climbing centre is for beginners. This is not for beginners. It’s an Elite bit of kit.

“The wall itself is only five metres tall and 30 metres long. The crucial element is that we have only two route setters in the country who are qualified to set Olympic routes and one of them works with me.

“It’s the sheer level of difficulty of the routes which is important,” said Tom, 40 who lives in West Didsbury with his wife Leanne and 19-month-old daughter Sarah-Rose.

“If you look at the rest of the centre, it caters for all levels we have two year olds and we have pensioners, but it’s not what you need as an Olympic athlete.

“We’ve tailored it so it works for the senior team as well and the junior team and the paraclimbing team.

“At any one time there will be 24 routes but we will change them every week and they will always be tailored to the climbers’ needs.”

For more information about Rock Over Climbing visit: www.rockoverclimbing.co.uk