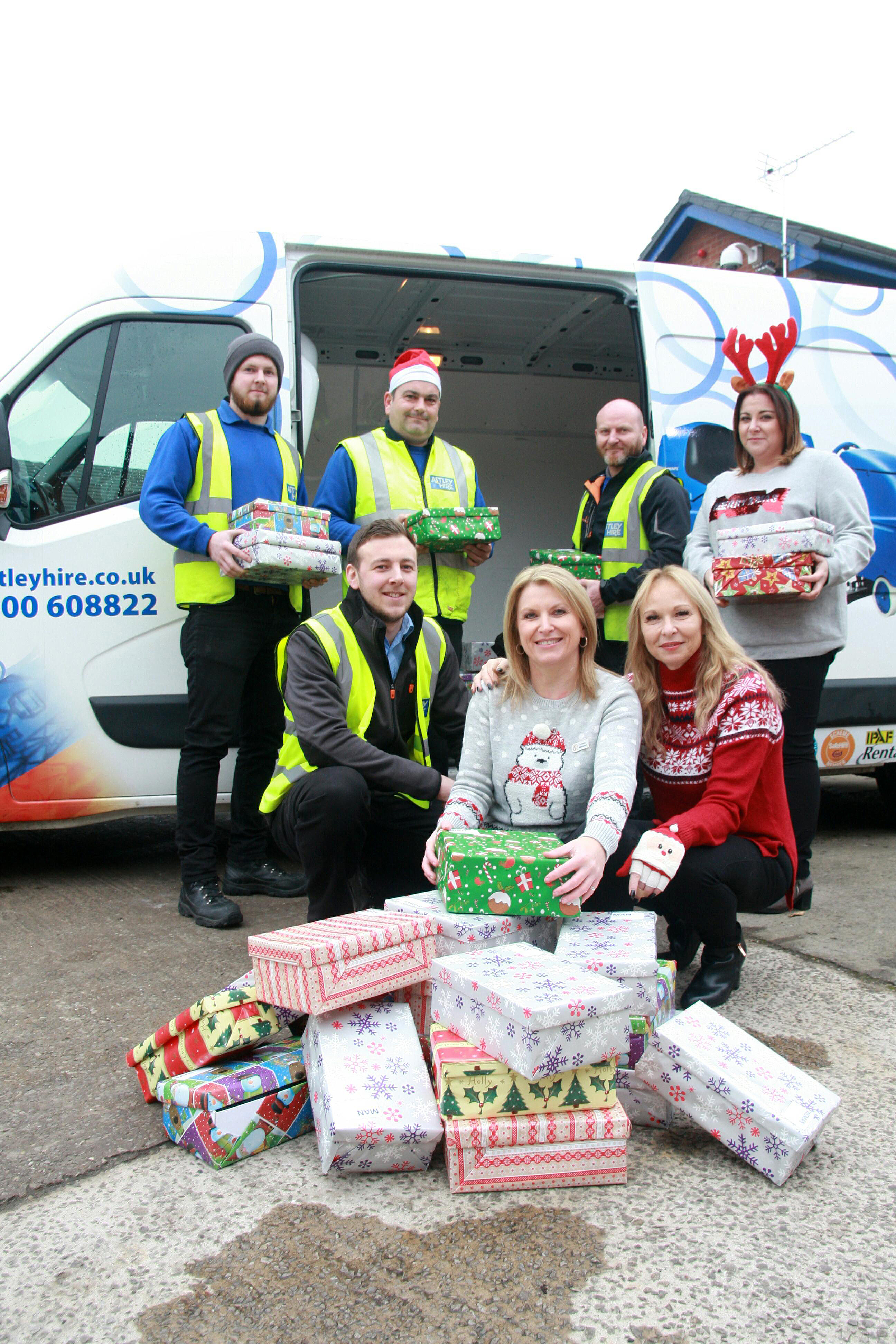 STAFF at family-run firm Astley Hire are doing their bit to lift spirits this Christmas after packing more than 100 shoeboxes with gifts for homeless people in Manchester.

Leigh-based Astley Hire, which supplies access equipment including cherry pickers, scaffolding and ladders, cleaning equipment and training across the North West, initially set themselves the challenge of filling 50 boxes.

The firm is celebrating its 50th year in business and staff wanted to give something back to the community, by donating boxes filled with toiletries, small gifts, winter woollies and even pet products to the Manchester Homeless Shoebox Appeal.

But following the marathon efforts of its 25 staff, their extended friends and family and generous business customers, the family-run firm has doubled their contribution to 100 boxes.

The bumper haul was delivered to Leigh-based Adactus Housing Group, which has volunteered to become a collection hub for the Manchester Homeless Shoebox Appeal, run by Manchester Street Angels.

The boxes will then be distributed to local shelters and homeless people living on the streets of Manchester in the run up to Christmas.

She said: “When a colleague mentioned a target of collecting 50 boxes to coincide with our anniversary I thought it was a great idea. It was a tall order but I was sure we could all do it.

“We had so many donations, we just kept going. I thought we’d packed everything when I left work on Friday but looking at the donation table on Monday morning, there was enough for another 10 boxes.

“Absolutely everyone has got behind it. I’ve helped to coordinate but I’ve had lots of elves running around and helping me. The fact that we’ve got at least 100 generously filled boxes, I don’t think anyone will be disappointed.”

Astley Hire, based in Lloyd Court on Jury Street, was established in 1966 by Cyril and Mildred Dorricott when they started hiring water pumps to motorway construction contractors out of the family’s grocery and hardware shop in Astley.

Lorraine, from Leigh, who has worked for Astley Hire for nine years, said the hire company had wanted to do something worthwhile to support a charity this Christmas.

“It was one of those spur of the moment things. We just wanted to do something that everyone could take part in,” said the 42-year-old. “It’s not just employees who’ve helped we’ve had donations from family, friends and customers.

“We’re so proud of their efforts. It’s also surprising just how much it’s got people thinking about others, especially now that the weather is so cold at the moment. People have really gone that extra mile.”

Astley Hire turned one of its training room into a production line over the course of 10 days and invited staff to bring in any unwanted gifts or goods from home ready to be packed.

Staff also took turns in their tea breaks to pack and gift wrap while others went into town to buy goods with the cash some staff and customers had donated to the appeal.

Photos showing the sterling efforts of the team were uploaded on the Shoebox Appeal’s Facebook page to drum up more support.

One member of staff, Hire Controller Andy Hughes added: “When I received the email about the appeal, I was very keen to get involved with such a worthy cause.”

Lorraine added: “Everyone has chipped in and there’s been a real buzz of excitement.”

Astley Hire’s Commercial Director Stephen Dorricott said: “I’m so proud of our staff for getting into true spirit of Christmas and giving this charity appeal 110%.

“All of our employees, their extended family and friends and customers have genuinely wanted us to succeed and nothing has been too much trouble whether we’ve asked staff to donate their break time to pack or gift wrap or go out to buy goods.

“I’m immensely proud that nobody said no and I think it’s a fantastic achievement to be sending 100 shoeboxes out into our community to those who really need our care and support.”

Astley Hire’s Operational Director, Michael Dorricott added: “I am very impressed how so many people have helped. Thank you to everybody who has helped to make a difference to people who would otherwise go without.”

In addition to personal care items, scarfs and gloves, Astley Hire made sure they had lots of dog gifts too in recognition of the fact that many homeless people also have a pet dog.

Bithells Waste Disposal Ltd in Wigan, a customer of Astley Hire, donated a £100 pet voucher while Pets at Home donated vouchers for the firm to spend in store.

Michelle Grundy, Head of Human Resources - performance at Adactus Housing Group, which will deliver the shoeboxes to the Manchester Homeless Shoebox Apeal for disctibution, said: “Working in partnership with local businesses is key in supporting community initiatives.

“Being involved in the Manchester Street Angels shoebox appeal for the homeless has gained widespread attention with donations received from across the region.

“Astley Hire’s very generous contribution will help ensure that this festive season, an even larger number of people in need, will receive real and practical help when they need it the most.”