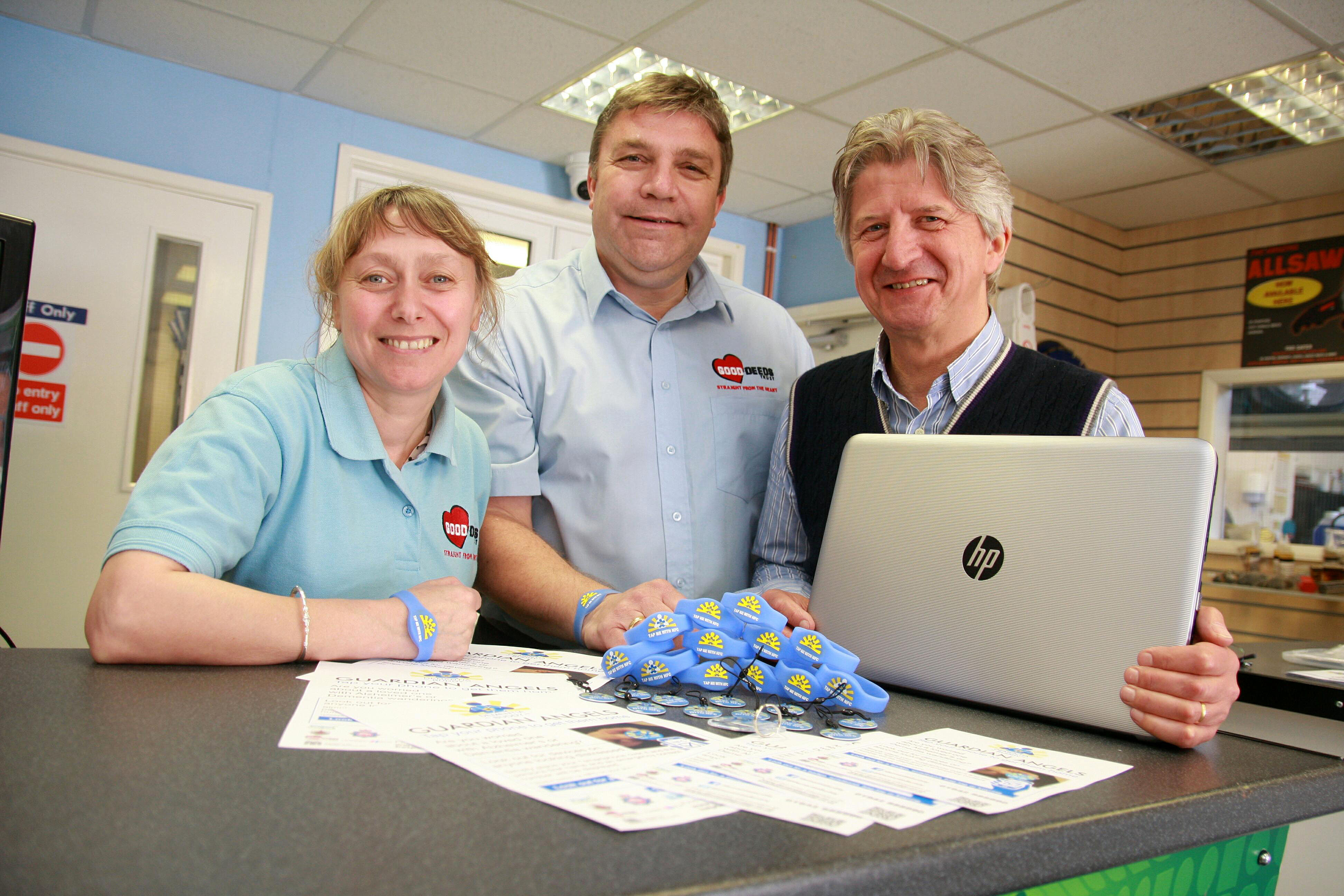 A couple who invented a life-saving wrist bands to help return missing dementia patients home are planning to introduce them across the UK and possibly even America.

The expansion of the unique Guardian Angels bands pioneered by former Wigan Mayor and Mayoress Mark and Karen Aldred is being boosted by the donation of a new laptop thanks to Leigh firm Astley Hire’s new £3,500 Community Foundation.

It comes as Mark and Karen, who run Atherton-based charity the Good Deeds Trust, celebrated a landmark, with more than 1,000 of the wrist bands being issued to families in Wigan, Oldham, Lancashire, and Bolton so far. A further 200 are to be distributed in Horwich following a launch in July.

The wrist bands were designed and developed by Mark after his father John repeatedly went missing due to vascular dementia, before he sadly passed away due to the disease, aged 67.

Karen and Mark have a busy training programme to show fire fighters, police officers, bus drivers, NHS staff and first responders how to use the bands, if they come across a disorientated person wearing one.

The devices, also available as keyrings, zip tags, and badges bearing the Guardian Angel logo, work by using Near Field Communication (NFC) technology and can be discreetly worn by dementia patients.

When a smartphone is placed next to the device it transmits a signal with the first name of the wearer, and a vital telephone number for a family member or guardian to the phone. The holder of the phone can then call the relative and alert them to the patient’s whereabouts.

Mark said: “We also want to raise awareness of them among the public so that if a person with dementia wanders into a shop looking lost and confused, then a member of staff may recognise the Guardian Angel logo and know straight away how to use it.”

Mark said: “We have nicknamed it a ‘tap your phone to get them home’ service, which is a simplified way of describing how it works.”

Mark, 48, said: “I have personal experience of this with my father. He would go out, sometimes in his pyjamas, but also with his heavy winter overcoat on and his cap, no matter what the weather.

“We would be frantic with worry over where he was. Had we had access to a Guardian Angel we would have taken comfort in the fact that there was a real chance for him to be found quickly and safely reunited with his family.”

The donation of a laptop from Astley Hire’s Community Foundation will drive forward a campaign to increase awareness about the Guardian Angels devices further afield.

Mark revealed interest is developing in the bands with enquiries from Berkshire, and even the USA.

He said: “We were recently visited by people in the dementia field from North Carolina who heard about us online and were so intrigued that they wanted to find out more. They are seriously considering introducing them across the Atlantic.”

Stephen Dorricott, Managing Director of Astley Hire said he and his brother, Astley Hire Operations Director Michael Dorricott, had no hesitation selecting the Good Deeds Trust to be the recipient of one of their 2017 Community Foundation grants.

Stephen said: “The Good Deeds Trust is exactly the type of cause we were thinking of when we set up the Astley Hire Community Foundation.

“Dementia is such an important issue in the modern world and the Guardian Angel devices offer much needed reassurance to dementia patients and their families.

and spread the word about this invaluable service.”

Astley Hire has been in business 50 years and employs 26 staff across seven divisions anchored at its Jury Street Headquarters in Leigh.

In honour of Astley Hire’s half century the company earmarked £3,500 to set up a Community Foundation to help local good causes. The firm invited applications for grants from the Foundation of up to £500 each, to give back something to the community which has so loyally supported it since 1966.

Mark is hopeful that the Good Deeds Trust’s new a laptop from Astley Hire will help take them to a new level in spreading the message about the Guardian Angel service.

He said: “We would love to see them widely used across the UK – even all around the world.

“The new laptop will help us buy a new laptop which the Trust’s team of 22 volunteers will use to lead training workshops and give illustrated talks about Buddys Guardian Angels initiative to interested public service organisations, health workers, social groups and dementia support clubs.

“We will visit anyone who invites us to explain more about the scheme. With laptops we can show them videos and interviews with users, clearly demonstrating how beneficial they are.

“We cannot thank Astley Hire enough along with everyone else who has donated to this important cause.”

Mark and Karen invented the Guardian Angel devices after consulting with other families touched by the heartbreaking consequences of dementia.

Mark said: “When we were talking to other families the most common problem which came up time and again was the fear that their loved one would wander off on his or her own then become confused and lost, with no way for the family to find them.

“That was our starting point and from there we came up with the idea of giving them an informative tag of some kind which could be discreetly worn about their person so that anyone who comes across them would be able to find out their name and alert their families as to where they were.

The team looked at a number of different types of devices in which to install the technology then consulted families about which they would prefer to use. The most popular choices were the wristband, keyring, badge, and zip tag.

Mark said the Guardian Angels initiative is simple but its impact is revolutionary.

He said: “This is the first time NFC has been used to help dementia patients in this way. It is so effective that it seems unbelievable it has not been thought of before.

The devices were manufactured and are now selling at £5 each with all funds going back into the charity.

Participants place a Guardian Angel sticker in a window at their home and if the dementia patient returns home having mislaid their keys, or otherwise unable to get in, Mark can be alerted when a smartphone is placed near the sticker.  He will then attend the property with the relevant keys to let them in.

To find out more about the Good Deeds Trust and the Dementia Buddy’s scheme visit: gooddeedstrust.co.uk

To find out more about Astley Hire visit www.astley hire.co.uk