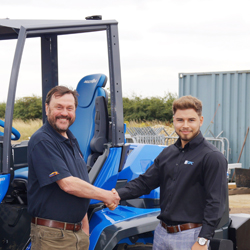 GT Trax, the Cambridgeshire based specialist hirer of temporary roadways and walkways, have taken delivery of a Multi-One 10.8 articulated loader. The machine has been supplied by the access machinery distributor, Cumberland Platforms.

For some time, GT Trax has been actively seeking a machine that was able to handle and install their range of temporary roadway panels and in particular their new Power Track 40 system. GT Trax first spied the Multi-One at the Ricoh Executive Hire Show and following their enquiry at the Show, Cumberland Platforms arranged an onsite demonstration. The performance of Multi-One  subsequently proved that the machine had all the capabilities to safely lift and install both of their Power Tracks 20 and Power Tracks 40 roadway systems.

“Our range of temporary roadways has developed vastly over the past 10 years,” explained GT Trax managing director, Trevor Tinker. “We needed a machine of this type to enhance our performance and efficiency on site. We did look at a couple of other machines but neither could match the exacting demands of our requirements. The Multi-One has excelled in all departments and it has a number of easily set up attachments, which means that most of our challenges on site can be overcome”, concluded Trevor.

GT Trax was formed in 2005, by Trevor Tinker and Graham Crisp. Over time the company has developed into a leading hirer of temporary roadway solutions to both the events and construction markets. In addition GT Trax has event seating, temporary structures and crowd control barriers ready to hire nationwide.