PRESS RELEASE: CanTrack Go 'Dutch' To Get Their Man! 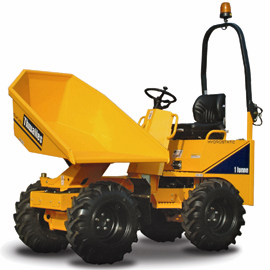 PANIU, the Met Police’s specialist plant theft unit, has recently reported a 7.8% increase in thefts, year on year, and an upward trend in the theft of ‘compact-equipment’ which will fit in the back of a panel van. This latest theft fitted these trends, most likely carried out by ‘professional’ thieves.

Unusually the Asset, hidden in the Thwaites dumper, failed to report its location for several days after it was stolen, however it suddenly popped up onCanTrack’sscreens giving an equally unusual location in the middle of the English Channel! The assumption being that the stolen machine was in a truck heading East!

It’s extremely rare for a stolen item to leave the UK before CanTrack’s investigations team get their hands on it and when one does, the operation to recover it becomes more complex. Logistically CanTrack must co-ordinate the tracking, their own people on the ground and both international and regional police forces.

The new CanTrack Asset has a wide range of technology built-in, with redundancy in case one is unable to work.However, in this case the full suite of sensors was available and CanTrack’s operations room was receiving regular, GPS position, updates.

After landing on the continent in Dunkirk, the truck headed East through France at a constant 56mph,and onwards into Belgium. This is a route that CanTrack’s team has seen before used by thieves. CanTrack put one of their experienced investigators on ‘red-alert’ with the plan of flying him to a yet to be determined ‘intercept point’ on the continent.

CanTrack monitored the HGV, with the stolen Thwaites onboard, as it circumnavigated Antwerp and headed East for the Netherlands and towards Germany. The route makes it hard to decide on a viable intercept point as the stolen cargo can make good progress, and there is no way of knowing, in advance, when and where the truck is likely to stop.

As members of the International Association of Auto Theft Investigators (IAATI)CanTrack has well established relationships with INTERPOL and national police forces. Whilst still monitoring the truck’s progress CanTrack contacted the Dutch police in Eindhoven to inform them of the situation. The Dutch Police Force is well regarded and always keen to assist in vehicle crime and this was no exception. Fortunately,at this juncture the investigators got a bit of luck as theCanTrack Asset’s GPS stream showed that the truck had pulled into services near Eindhoven and registered a stop.

CanTrack relayed this information to the Eindhoven Police who dispatched two police cars to the services.CanTrack’s team in the UK entered into a two-way running commentary with the Eindhoven police control room in what would turn out to be a 90-minute cat and mouse game.

“Our colleagues are now at the services” reported the Dutch control room operator. In the UK, the CanTrack Asset was still showing the suspect truck was stationary as the Dutch Police combed the busy services for a likely truck. This continued for 20 long minutes.

In the UK CanTrack’s team saw that the unit was again on the move passing the petrol station forecourt. “Please tell your colleagues the vehicle has just moved past them in the forecourt” was an urgent messaged relayed to the Dutch control room.

Unlike CanTrack’slive fleet tracking unit, GPS, the CanTrack Asset is not designed to work as a live feed. The data shows the correct time and position but it comes through up to a minute later and CanTrack needed to give the local police cars an accurate picture of the truck’s location in real-time.

Using mapping tools and the constant speed of the HGV CanTrack’s team calculated, with increasing accuracy, where the truck was on the road with every update. CanTrack had also remotely triggered the unit to update more frequently. Feeling confident CanTrack told the police that “He’s passing under the junction now” knowing full well that confidence would be lost if the ever helpful, but no doubt increasingly frustrated police, didn’t get him an hour after the job started. Using the information, the police stopped an HGV, and after an agonising 4-minute wait, the Asset updated its location showing it was still moving. The police had stopped the wrong truck!

CanTrack’s operations room pulled up live traffic information and using the GPS information homed in on another truck.  After relaying the information to Eindhoven, the control room reported back that “We’ve made a stop, stand by for an update”

The next GPS update showed the suspect truck in a lay-by and stationary!

“We got it!”  reported the Eindhoven control room to an ecstatic CanTrack team.CanTrack’s investigator never got beyond ‘red-alert’ as the technology and excellent co-operation from the Dutch Police enabled CanTrack to ‘get their man’ and the client’s machine back.

The Dutch Police are very efficient at re-patriating stolen equipment and CanTrack’s client will soon be re-united with his stolen machine after a ‘real-time’ chase across Europe that ended in success.