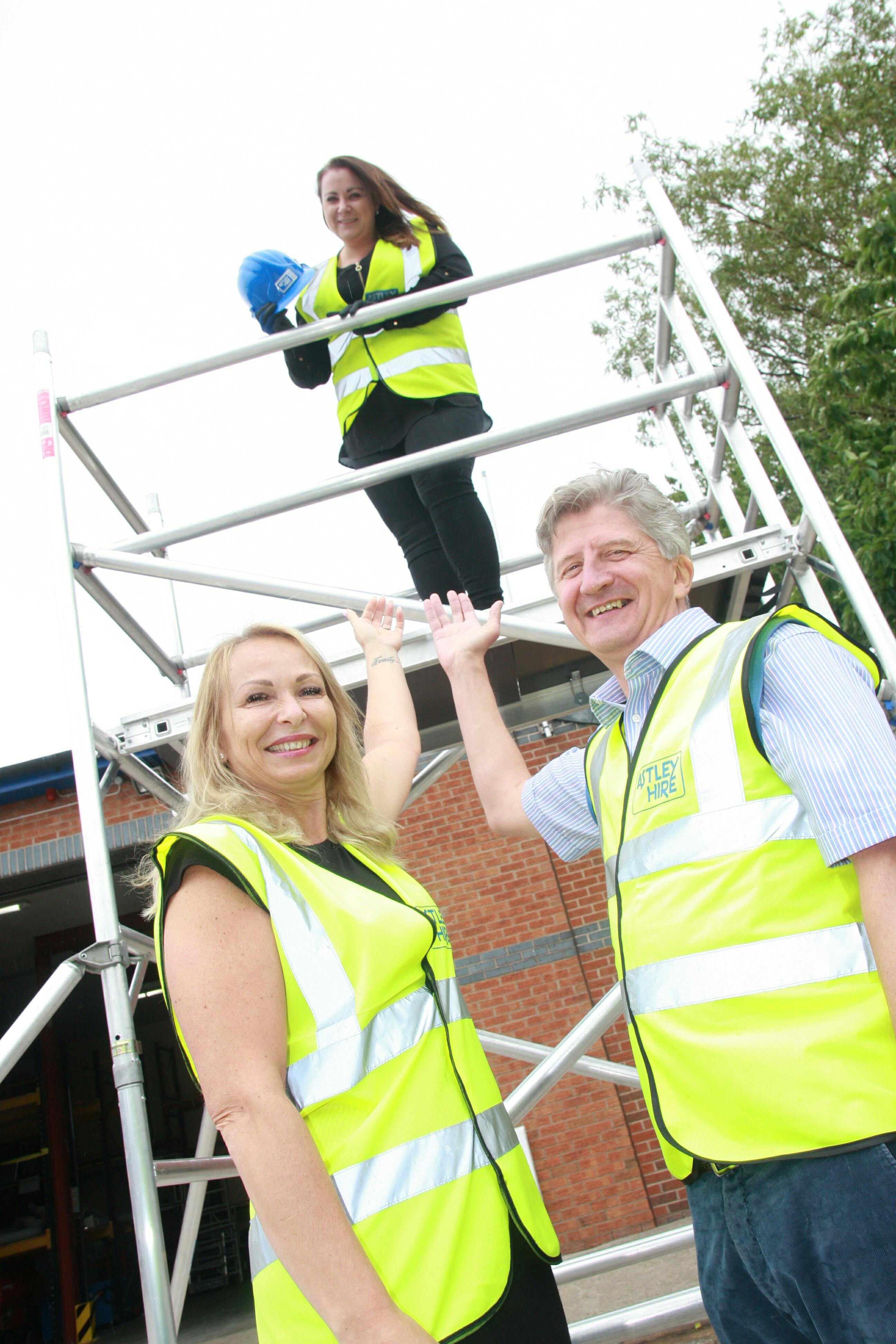 A former admin assistant has become the fourth woman in the UK to gain an internationally recognised qualification to teach people how to erect mobile aluminum scaffold.

Pam previously worked amid the dizzying heights of Manchester United premiership football club, as part of its customer service team. But she has no regrets about leaving to follow her own sky-high ambitions.

Pam committed herself to nearly eight months of rigorous theoretical and practical training to gain her qualification.

She said: “I’d had no experience of putting up scaffold before, either at home or in my work, but I somehow just knew it was the perfect role for me.

“I’m so grateful to everyone at Astley Hire for putting their trust in me and giving me the opportunity to do this. It has put me on a whole new exciting career path.”

She said: “Craig has been a great inspiration. When I first started I shadowed his classes, learning a lot from him including equipment use and teaching skills, and he supported me throughout the months of studying leading up to my final exams and assessment.”

Astley Hire managing director, Stephen Dorricott, whose parents, Cyril and Mildred, founded the firm, said Pam’s enthusiasm for the role shone through from the moment she was interviewed.

He said: “We have been constantly impressed by her 100 per cent commitment, at first to her studies to gain her instructor qualification, and now to the job itself. Her competency and capabilities are outstanding.

“We’re very happy to have her in our training centre team.”

To qualify Pam had to attend courses in Birmingham and also study after work at home, producing essays and undertaking assignments. She was also assessed by experts on her ability to conduct training classes.

Now she regularly trains people to erect and work on mobile access towers.

She said: “It is essential for anyone working with and building mobile access towers nowadays to have a PASMA licence to show they have been trained in the various health and safety issues surrounding this equipment and that they are aware of all the usage protocols.

“The licences also have to be renewed every five years.

“We frequently run courses for people from across a range of industrial and commercial sectors, but we can also train people who want to hire a scaffold.

Pam lives in Leigh with her two children, who are both hugely impressed with their mum’s achievement in becoming one of only a handful of female instructors.

She said: “Whenever we walk by anyone on a scaffolding tower or using other access equipment they always comment on it, saying ‘that’s what mummy does’. They love the fact that I work in this sort of industry.”

Pam acted on impulse after she saw the advertisement for the job with Astley Hire, an industrial equipment hire business which has been operating for 50 years and employs 26 staff across seven divisions anchored at its Jury Street Headquarters in Leigh.

The family firm was seeking a person to undertake a combination of administrative duties and train as an instructor at its specialist training centre, to teach individuals how to erect scaffold.

Pam said: “I definitely knew I could do the administrative side of things as I had done a lot of office work in the past and previously worked with in the industry, but I was thrilled when I convinced them of how much I wanted to become an instructor as well.

“There aren’t many women in this sector, I suppose because it has always been perceived as a male dominated industry, but the numbers are slowly rising.

“It’s more about learning the correct techniques, health and safety procedures and installation processes. I have a real passion for the job now, I love it and want to learn as much as I can.”

Astley Hire arranged for Pam to be trained via PASMA – Pre-fabricated Access Suppliers and Manufacturers Association – which is the pre-eminent body representing the scaffold and tower access industry.

The majority of PASMA licensed instructors are men, but the organisation encourages women into the fold and at this year’s annual meeting its members elected Gillian Rutter as the first woman chairman in the association’s 43 year history.

Gillian is a keen advocate of encouraging more women into the access industry, having herself been one of the first women to successfully complete PASMA’s industry standard ‘Towers for Users’ training course, when aged just 17.

Pam has followed in her footsteps to become the fourth such female currently licensed to train in the UK and only the fifth woman ever to have attained this type of PASMA qualification.

She now hopes to add to her already impressive CV by gaining qualifications to train people in other vital industry skills.

She said: “My next goal is to gain my IPAF – International Powered Access Federation – instructor certificate which would enable me to teach people how to operate powered access equipment such as cherry pickers and scissor lifts.”

To find out more about Astley Hire visit astleyhire.co.uk or find the firm on Facebook.