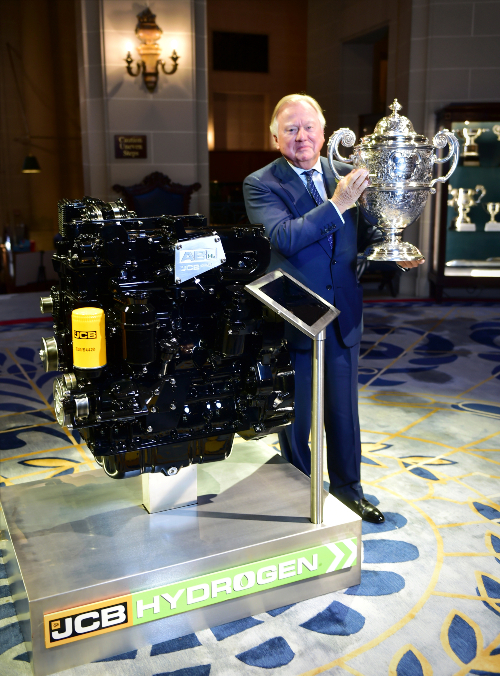 JCB's super-efficient hydrogen engine has won one of the oldest and most prestigious awards in British automotive engineering honouring technical achievement.

At a ceremony in London, JCB Chairman Lord Bamford was presented with the Royal Automobile Club's Dewar Trophy for the company's development of a hydrogen fuel motor. It is the third time that JCB's innovations have been honoured with the Dewar Trophy.

John Wood MBE, Chairman of the Dewar Technical Committee, said: "JCB has been a pioneer in terms of powertrain development since it started building its own engines in 2004. That ethos has continued with its latest hydrogen-fuelled engines, which are an inspiring combination of current expertise and next-generation technology."

Anthony Bamford said: "We're extremely proud that the Royal Automobile Club has chosen to present JCB with the Dewar Trophy for the third time.  Our new hydrogen-fuelled engines can be put into production relatively quickly and it's an important and pioneering step towards a zero-carbon future, and testament to the amazing abilities of our British engineers."

JCB's purpose-engineered zero CO² hydrogen fuel motor was designed after a challenge to the company's engineers from Anthony Bamford. The newly designed motor harnesses JCB's existing expertise and supply chain infrastructure. The company is investing £100 million in the project and has two prototype hydrogen fuelled machines on test: a backhoe loader and a Loadall telescopic handler.

Presented to the Club in 1904 by Sir Thomas Dewar MP, and since 1957, the Dewar Trophy has been presented in recognition of 'an outstanding British technical achievement in the automotive field during the preceding year'. In 2019 JCB was recognised for the launch of the 19C-1E electric mini excavator. In 2007, JCB won the Dewar Trophy after the JCB Dieselmax team set a diesel-powered Land Speed Record of 350.092mph on the Bonneville Salt Flats, USA.