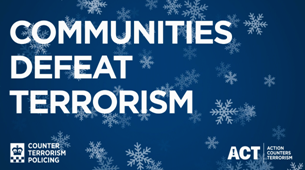 The Counter Terror Policing’s Winter Vigilance campaign was launched on Monday 19th November 2018 and throughout the winter of 2018 /19 we are urged to remain alert and help us all keep events and crowded places safe by being vigilant and reporting anything suspicious to police, members of staff or security personnel.  For further information visit gov.uk/ACT.

Counter Terrorism Policing has also collaborated with advertising experts, Kong Media, to reach thousands of UK shoppers with vitally important safety information. Across the country, security messaging will appear on advertising boards and digital screens around crowded Christmas events and key shopping locations, reminding the public about the crucial role they play in helping to tackle the terrorist threat.

A number of other advertising experts have also offered their support to ensure we have nationwide coverage.

Launched on Monday 19th November (five working days ahead of ‘Black Friday’ – the busiest shopping day before Christmas) the campaign will run until 5th January to incorporate the start of the New Year sales.

Please find links to the Counter Terror Policing’s digital toolkit, including the press release, images and key lines to take.

We are asking businesses across the country to support the campaign both internally and externally. The big screen message, which is a gentle reminder to be vigilant, can easily be used on internal digital displays as well as external. Digital teams can either create their own content using our suggested messaging or use ours and sign post people to our web site www.counterterrorism.police.uk .

The content, which we’ll be adding to as we countdown to Christmas, can be downloaded from our website, via WeTransfer or you can retweet on Twitter @TerrorismPolice. If you need additional information or assets drop us an email at nctphq.comms@met.pnn.police.uk