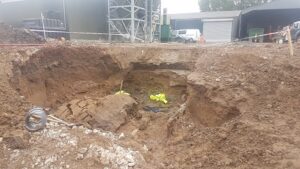 Harlands Builders Limited has been fined for safety breaches after a ground worker was trapped having entered a two-metre-deep excavation. Bridlington Magistrates’ Court heard that, the company was undertaking groundworks at West Farm Stone, Creek Sunk Island, East Riding. The worker had entered an excavation in order to measure the depth when part of it collapsed on him.

An investigation by the Health and Safety Executive (HSE) found that the excavation had three sheer unsupported sides and was not battered back. The worker was trapped by the collapse and sustained a broken tibia and fibula on his left leg. Other workers were also put at risk as they went into the excavation to free the trapped man.

Harlands Builders Limited of Medina House, Station Avenue Bridlington, East Yorkshire pleaded guilty to breaching Regulation 22 (1) of the Construction Design Management Regulations 2015. The company has been fined £12,000 and ordered to pay costs of £1,139.