JCB has lifted a top award honouring the environmental benefits of its new all-electric telescopic forklift. 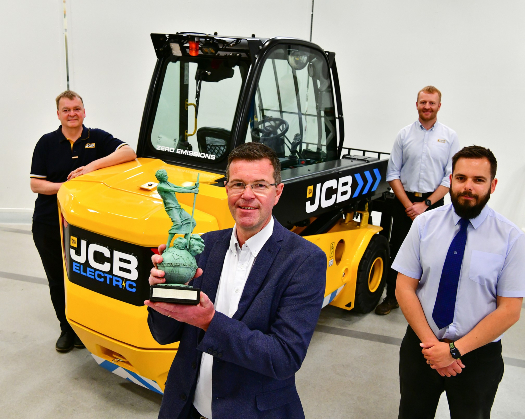 The JCB Teletruk was launched in 1997 and remains the world's only telescopic lift truck to offer users the benefit of forward reach thanks to its telescopic boom. Now the new electric version of this popular machine - the JCB 30-19E - has won The Environment Award from the Fork Lift Truck Association (FLTA), Europe's leading trade body for the materials handling industry.

Judges said the machine - the world's first electric telescopic forklift - was "ideal for urban environments" thanks to its zero emissions and low noise levels. JCB has received a statuette - known as an 'Archie' - to mark the success.

JCB Chief Innovation and Growth Officer Tim Burnhope said: "It's always an enormous thrill to be recognised by your industry peers and we are delighted to win the Environment Award from the Forklift Truck Association. The opportunities for the new electric Teletruk are immense both in terms of benefitting the environment in a very big way and reaching into new markets."

Until the electric model's launch, JCB's Teletruks were powered by diesel and LPG and used predominantly in outdoor applications. With the launch of the new electric model, the Teletruk now becomes suited for a wealth of tasks inside buildings.

Because it is battery powered, the JCB 30-19E is supremely quiet and produces zero emissions - making it suited to multiple tasks inside buildings. Power is provided by an 80-volt lead acid battery and it can work a full eight hour shift on a single charge. The launch of the new electric JCB 30-19E opens the door to a global market, in which almost 250,000 units are sold globally every year.

One of the key advantages of the JCB Teletruk is its ability to load and unload curtainsided trailers from one side thanks to its telescopic reach - a feature which saves vast amounts of space. In 1998, a year after its launch, the Teletruk won an unprecedented three 'Archie' awards from the FLTA for innovation, safety and ergonomics.