The theft of equipment from construction sites and farms has a significant impact on the businesses targeted from both the loss and replacement of the equipment taken, in addition to the cost of temporarily reduced activity and downtime within these sectors. 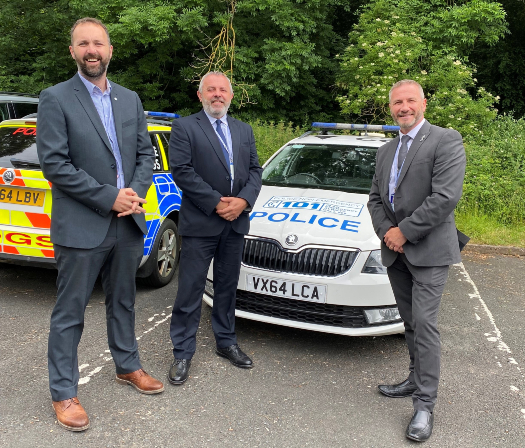 The launch of the Construction Equipment Association (CEA) owned Official CESAR Scheme back in 2007, has had a major impact on criminality across both sectors, driving down theft significantly for machinery brands that have adopted the scheme. Now, with the launch of a new Police Unit, CESAR will have an ally in its fight against this type of crime.

The newly established dedicated Agricultural and Construction Equipment (ACE) specialist police unit will be managed and operated within Opal, which is the national intelligence unit focused on serious organised acquisitive crime (SOAC) across the UK.

The 'foundation' launch of ACE took place in April 2021, where the new unit was introduced to police forces nationwide, key partners and collaborating trade associations. The key message was that cross industry cooperation is crucial for the success of the new unit. The ACE team is here to support the wider problem solving approach through partnership; 'prevention is better than the cure'.

Opal was established in April 2019 under the governance of Deputy Chief Constable Amanda Blakeman, the national police lead for acquisitive crime. The unit has ten intelligence staff, including intelligence analysts and researchers, alongside police officers, under the day-to-day lead of Detective Superintendent Neil Austin.

The unit will focus on the offences committed by organised crime groups which are part of a series and involve cross border offending. By developing proactive working relationships with law enforcement, partner and business agencies the ACE Unit will work to reduce the theft of stolen plant and agricultural equipment and maximise the recovery of stolen equipment, both nationally and internationally.

Officers from ACE will work to develop, collate and co-ordinate intelligence from a variety of sources to identify and disrupt organised criminality and target those involved in these thefts, also identify any current and emerging crime trends and threats. The reason ACE was established on the back of Opal is because the unit already has a foothold nationally and intelligence can be shared between the forces.

The ACE national intelligence hub team will work closely with the industry, developing positive working relationships to support and promote schemes such as CESAR to prevent theft and maximise the recovery of stolen equipment.

Detective Inspector Ernie Locke, Opal National Intelligence Unit, Serious and Organised Acquisitive Crime commented on the new ACE Unit, "ACE sits under the Opal umbrella and benefits from a dedicated intelligence team which includes Analyst Luke Rawlings, who is a massive asset, with support from Superintendent Andy Huddleston, Police Community Support Officer Pete Johnson, who has a vast knowledge of rural crime and the latest recruit who will be joining the team in the near future, Intelligence Officer Scott Jeffreys. By working smarter and in partnership with law enforcement agencies, government agencies, business and industry also, academia it will deliver a whole system approach in tackling agriculture and construction equipment theft. It is anticipated that ACE team will continue to grow as their contribution is recognised in this area of criminality.

"Our role has many facets including problem-solving skills, delivering the four Ps strategy of prepare, prevent, protect and pursue, identifying emerging threats and intelligence on a regional, national and international level. By working collaboratively, sharing best practice and the timely sharing of information, the ACE unit will help reduce agricultural and construction equipment theft.  It's a very exciting time for the team and I would like to thank all the 'donors' that made establishing this new Unit possible."

Deputy Chief Constable Amanda Blakeman, National Police Chiefs' Council (NPCC) lead for Serious Organised Acquisitive Crime said, "This is a really positive move to improve the response of UK policing in tackling the organised theft of plant and agricultural equipment. The investment will help develop a detailed intelligence picture which will support forces in reducing criminality in this area. We are really grateful for the strong support of partners such as the CEA, the AEA and the insurance industry and welcome their commitment to developing a strong working relationship moving forward."

Superintendent Andy Huddleston, NPCC Lead for Agricultural Machinery Theft commented, "The launch of the ACE team will massively help the fight against agricultural machinery theft, the sharing of intelligence and targeting of Organised Crime Groups in this specialist area of thefts is key. I very much look forward to working with the team and the operational benefits this will bring to UK policing."

Deputy Chief Constable Debbie Ford, NPCC lead for Wildlife Crime and Rural Affairs, said, "I would like to thank the people who've been involved in setting up the new agriculture and construction equipment team otherwise known as ACE, particularly those who have helped fund this really vital project in tackling organised crime. As you all know the cost of agricultural machinery theft can exceed £30 million a year and that issue is growing all the time, therefore the importance of the ACE team cannot be underestimated. The effort that went into getting it up and running will hopefully pay dividends in tackling this serious issue.

"It's really important to our communities we know the issues that affect our rural areas and this is a real opportunity to be a defining moment in tackling organised rural criminality."

The Unit is funded jointly with donations from the Construction Equipment Association (CEA) the Agricultural Engineers Association (AEA) and a group of insurance companies, including Allianz, Aviva, Axa, HSB Engineering Insurance, NFU Mutual and QBE, with a specific interest in the construction plant and agricultural sectors.

Gary Thom from Aviva, one of the donor insurers, is delighted that the new Unit is now live; he said, "It is great news that the launch of the new ACE police unit is being announced. A team dedicated to reducing theft of plant and equipment, and the consequences that has for the victims of crime, is a very welcome development.

"The launch of the new unit is also very timely, as the country recovers from the pandemic and returns to more normal levels of activity with the potential that brings for increased criminality. I appreciate the efforts by all parties involved."

Rob Oliver, Chief Executive of the CEA, is looking forward to a strong working relationship between ACE, the CEA and the wider construction industry; "Stakeholders through the industry have been keenly awaiting this initiative to come to fruition, so it is great that it is now in operation with the partnership with Opal. We will be engaging with companies and organisations, such as CITS (Combined Industry Theft Solutions), to support the work of ACE in what is an evolving criminal threat."

Stephen Howarth Agricultural Economist at the AEA (Agricultural Engineers Association) is also welcoming the new ACE unit; "As well as the financial cost, theft of agricultural vehicles can be incredibly disruptive to farm businesses, who often need to carry out activities in a limited time window, often at short notice. Therefore, we welcome the new ACE team and look forward to working with them to drive down this significant element of rural crime."

The first 'in person' meeting of the ACE team, manufacturers, operators, hirers and insurers will take place on 22nd July. The aim of the meeting will be to formally introduce the new ACE Unit and discuss issues surrounding machinery theft.